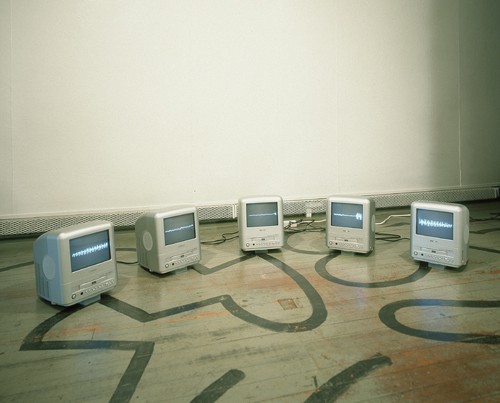 2004; dimensions variable 5 monitors, sound Monitoring the Process is a sonic sculpture that started out as an intention to air again the voices of some artists who have exhibited their work in this same space, the New Arts Program, in the past. I was interested in what they had to say about art: What is form? What is content? How do they become interrelated? What is context? How do the artist’s intentions become apparent and where do they come from? I wanted to emulate a dialogue—one that in real time never existed—. Dialogue, a form? a species? that is extremely endangered these days and, along with it, to bring about the idea of another form at high risk of extinction: democracy. To be able to create and exchange meaning, to expose ideas freely, to focus on this as process without zeroing down to a conclusion, was what interested me from the beginning. To trace a path from the private realm of thought, of how an idea is actually developed, to the more public one of conversation where thoughts are being communicated.

If we extrapolate this process, that is if we take it to regular decision-making processes—basically that includes every second in our daily lives, give or take since if you trace everything you do, there’s always a moment in which a decision is being taken, a choice on how to do/talk/think about something is being made— it is interesting to note that most of the time we are not aware of our decision making processes and we would have to make a big effort to make it conscious. Again, if we extrapolate this individual process to a public one in which more than two persons are involved, it is difficult to dissect the process and understand really what goes on. Imagine then what is involved in the making of a democracy—since a democracy, because of its very nature, is never static, it’s always in the making—. Where is the democratic form taking place? Is it really happening in the screened debates? Or should we start to look for it deep within ourselves?